The Right To Be Different 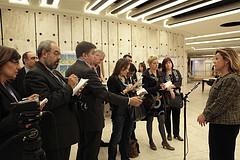 a There was once a child who could not see, was blind from birth and lived in a small town where there was only one school. A Rafaelito had trouble coming to school, because sometimes his mother, who worked very hard, I could not let him go and at home, without embargoa Rafaelito learning every day away from home and return, guided by the number of steps, sounds, smells and voices heard, while on his staff was helping. That was Rafi learned to go to school and back home, alone without help, more than his own. One day it happened, that one of his classmates Jack, did not return home after school, his mother thought he had been playing with his friends, as sometimes happened, however it was getting dark and Jack did not arrive, the mother became concerned and began looking for him any friend knew him. Rafaelito thought and thought and suddenly said: "I know where this" and ran to where his mother and said: "I know where," but would not let him speak: "it is night, it's dark, we will suspend the search until dawn, "Rafaelito worried about Jack, he was afraid of the dark, grabbed his cane and started going to the old mining town, where coal was removed many years ago and where they sometimes meet to play , it was guided by their "Signals" and arrived, he heard there crying Jacky, who was glad to see his friend and together they returned to the village where all prayed to find Jack.